How to Use the Cone Calculator

This calculator allows you to find various measurements of a circular cone given two or more known values.

To find a cone's dimensions in terms of its area, you can click the 'Area' button and supply the known value for the area and one of the remaining dimensions (either the cone's radius or the cone's height). The calculator will also display buttons with the calculated dimensions and volume that can be used to copy these values to the clipboard.

Finally, to find the dimensions and area in terms of a cone's volume, click the 'Volume' button and enter the known dimensions.

A cone is a three dimensional object that arises from a circular base defined by a radius and tapers across a height dimension to a point. This definition of a cone is more technically a description of a right circular cone, however more generally cones can also have elliptical cones may have non-circular bases (an ellipse). Additionally, an oblique cone is where the center point of a cone's base and a cone's apex do not form a line that is orthogonal (i.e., a right angle) to the cone's base.

While we often think of cones within the context of physical geometry, cones also play a role in visualizing the observablility in the context of physics and cosmology. A light cone is a way to visualize the observable boundary with respect to both the spatial location and time of an event. Because information about an event (an observation) cannot travel at a speed exceed that of light, the ability to observe a particular event is restricted to a volume of space (represented as the increasing radius of a cone) reachable from the event's origin within a span of time (where the changes in time is represented by the various positions along the height of tahe cone.) However, since space is actually three dimensional, the observability horizon for any given time since the event occurred is also a three dimensional surface, so this changing surface is more appropriately a sphere (rather than a circle) that expands with time. As such, even though they are typically illustrated two dimensionally, the circular cross sections of a light cone are actually hyperplanes in three dimensions, which means a light cone is actually a four dimensional hypercone. There's was ice cream joke in there somewhere, but it's lost in spacetime now.

Cones are related to circles in many respects and correspondingly a sphere's geometry is intertwined with the constant pi (π). The equation for volume of a circular cone can be thought of as integrating the volume of a stack of cylinders whose radius changes with the height of the cone using Cavalieri's method of indivisibles. The equation for surface area is found using similar techniques. In fact, integration is nessary for deriving the basic equations for volume and area of a cone used by most high school level geometary as well as in this cone calculator...

Equation for Area of a Cone

Equation for Volume of a Cone

Cone
A cone is a three dimensional object that is defined from a circular base (defined by a radius) and tapers across a height dimension to a single point. Depending on context, a cone can be regarded as a solid object, including all of the points that fall within its volume, or merely as a surface that includes only the points that fall on its lateral dimension.
Apex
The cone's top point or vertex; the opposite of a cone's base.
Base
In the context of a cone, the base is the circle or ellipse that makes up the bottom flat surface. This cone calculator assumes circular cones. You can see the area of a base identified as a separate value in the cone calculator preview area.
Circular Cone
A cone whose base is a circle.
Elliptical Cone
A cone whose base is an ellipse instead of a circle; this calculator does not calculate the volume or area of elliptical cones.
Oblique Cone
If a cone is not a right cone, its sides will be assymetrical. In these cases, the volume is equal to that of a similar right cone, but calculating the lateral surface area is vastly more complicated. This calculator does not calculate the surface area of oblique cones.
Lateral Surface
The outer sloped (and traditionally vertical) surface of a cone. It does not include the cone's base. This cone calculator computes the lateral surface area of right circular cones.
Right Cone
When the center of a cone's base and the apex of a cone form a line segment that is orthogonal (at a right angle) to the cone's base, the cone is a right cone. This is typically what you think of as the traditional symmetric shape of a cone. This calculator will find volume and surface area for right cones.
Slant
The dimension from the apex of a cone to a point on outer edge of a cone's base. 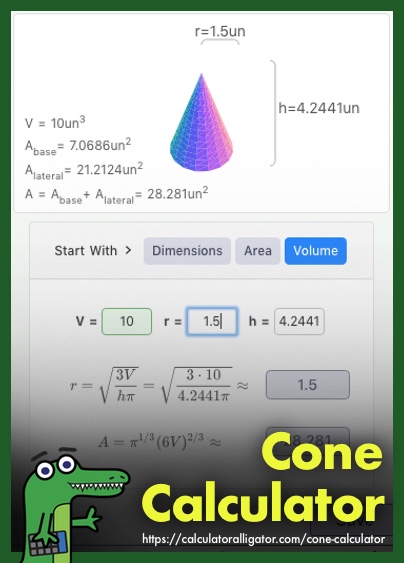