How to Use the Hemisphere Calculator

This calculator allows you to compute radius, height or volume of a hemisphere given a known value.

To calculate a hemisphere's radius and volume in terms of its surface area, you can click the 'Area' button and supply the known value for the area. This will also display buttons with the calculated hemisphere volume and radius values that can be used to copy these calculations to the clipboard.

Hemispheres are often created when the dividing plane passes through the sphere's origin orthogonal to the sphere's axis of rotation. In this case the plane is dividing the sphere at the equator, in effect creating a Northern Hemisphere and a Southern hemisphere from the original volume.

Hemispheres are also commonly referred to as subdivisions of the celestial sphere in astronomoy. The celestial sphere is a construct used to visualize the positions of astronomical objects as though they were mapped to the surface of a sphere being viewed by an observed placed at the sphere's origin.

Because a hemisphere is exactly a sphere divided into two halves, the formulae for dealing with hemispheres relate very succintly to the same calculations for spheres. For example, the volume of a hemisphere is calculated using a modified version of a sphere's volume formula, just divided by two.

Equation for Volume of a Hemisphere

Equation for Area of a Hemisphere

The radius or height can easily be derived from the volume of a hemisphere using the following equation...

Equation for Finding the Radius of a Hemisphere from Volume

You can see when a radius or height is not provided, this hemisphere calculator finds the radius (or height) of a hemisphere, and substitutes that value into the conventional equations for volume and surface area. 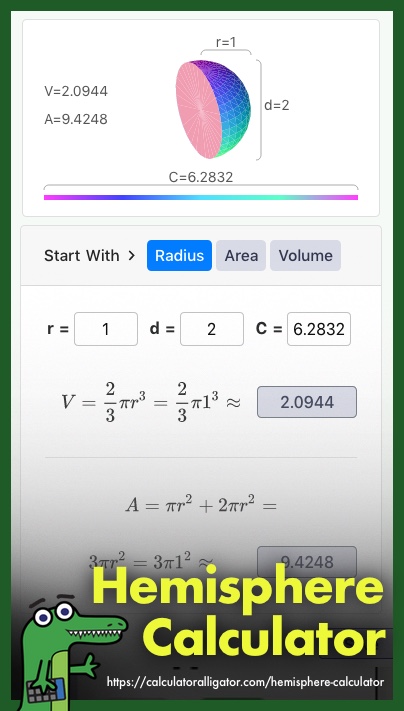