How to Use the Pyramid Calculator

This calculator allows you to compute various measurements of a square right pyramid given a few known values.

To calculate a pyramid's dimensions and area in terms of its volume, you can click the 'Volume' button and supply the known value for the volume along with either the base or height dimension. This will also display buttons with the calculated pyramid dimensions and surface area values that can be used to copy these calculations to the clipboard.

A pyramid is a solid geometric shape whose base is a polygon and whose sides are triagles that meet at a single apex point. We usually associate a pyramid with a shape having a square base, and therefore its sides will have the same shape and size. The Great Pyramid of Giza in Egypt has this shape. However, a pyramid can have other shapes for its base, including shapes where all the sizes are not the same length. The pyramid calculator on this page works specifically with right square pyramids, but if you read the discussion below you should have a good idea of how to calculate dimensions of more complicated pyramids.

A pyramid's apex point is traditionally located vertically above the center of the pyramid's base, creating a line segment that goes from the apex to the base's center point at a 90 degree angle. This creates a right pyramid. If the apex point is not centered over the base, the pryamid will appear to "lean" to one side or the other, and the dimensions of the triangular faces will be different from each other. Again, this pyramid calculator finds values for square pyramids.

Equation for Volume of a Pyramid

The pyramid's lateral surfaces are all triangles, and unsurprisingly we use the formula for area of a triangle to find the area of each of those surfaces.

Equation for Area of Triangle

The base of the triangle is easy to figure out... It's the same as the base of the pyramid; that's one of the values we enter directly into the calculator. The second parameter, the triangle's height, is NOT the same as the pyramid's height pyramid. This is obvious when you think about it for a minute... The height dimension we enter into the calculator is three dimension height of the pyramid, the distance from the base's centerpoint to the apex point. That value is going to be less than the distance measured across one of the lateral faces from the base to the apex. We refer to that measurement in the calculator as the slant dimension, it's the s variable, and that value is calculated using this formula

Equation for Height of Lateral Surface

Using that value as the height of the triangle and taking the same dimension for the base, we can find the surface area of each face easily using the formula for area of a triangle. Then, to compute the total surface area we add the area of all the faces to the area . Because this is a right square pyramid, we have four faces that are the same size, so our total area is calculated like this...

Equation for Area of a Right Square Pyramid 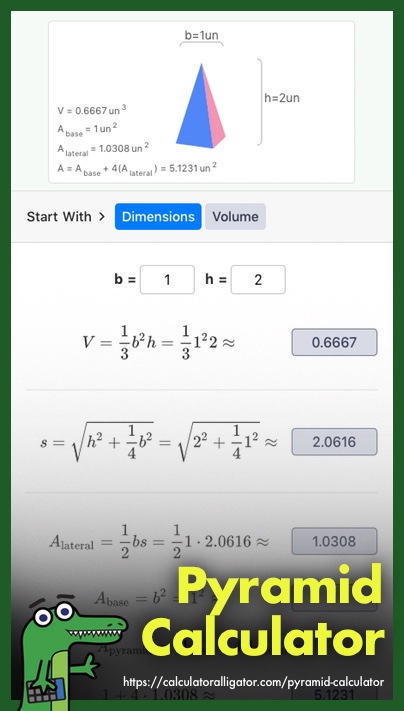