How to Use the Sphere Calculator

This calculator allows you to compute various measurements of a sphere given a known value.

To calculate a sphere's radius and volume in terms of its surface area, you can click the 'Area' button and supply the known value for the area. This will also display buttons with the calculated sphere radius and volume values that can be used to copy these calculations to the clipboard.

A sphere is a curved symetrical three dimensional surface, where every point on that surface is exactly the same distance from a center origin. Because of this unique symmetry, a sphere can be defined by only a single measurement, its radius, which when swept in all three dimensions describes a mathematically closed surface. Technically, a sphere is comprised only of this surface. While a sphere encapsulates a volume, the space inside the sphere is not considered part of the sphere. Mathematicians will sometimes distinguish between a shere and its enclosed volume by referring to the later as a ball.

While perfect mathematically perfect spheres are rare in the real world, we encounter the approximation of spherical objects of all sizes regularly. The Sun, the Earth and the planets are all approximately spherical shape. Many toys you played with as a child, including balls and marbles, are spheres. And spheres are commonly used in industrial applications, for example as high-pressure fluid tanks or as components in ball bearings. Physicists consider spheres and the tineiest conceivable scales. Fundamental particles such as protons, the nucleus of a hydrogen atom, are considered to be very small spheres with a radius of roughly (0.85 × 10-15 meters.

The uniform geometry of a sphere makes it attractive when approximately a number of math and physics problems. The different variables relating to a sphere's geometry can be calculated from each other using a small number of formulae all related to a sphere's radius, which again is the one dimension necessary to determine a sphere's size, surface area and volume. A sphere is the most efficent shape in terms of its ratio of surface area to volume.

Like its two dimensional cousin the circle, a sphere's geometry is intertwined with the constant pi (π). An orthogonal two dimensional section through a sphere yeilds a circle, and if that section also includes the sphere's center point, the circle will be the maximum size that can be created by slicing that sphere. The radius, diameter and circumference of that circle will be the same as that circle.

However, unlike two dimensional shapes, three dimensional solids by definition have a surface area and a volume. These calculations for a sphere are also intricately related to π. For surface area, you can think of the problem in terms of how many squares with height and width dimensions equal to the radius it will take to cover the surface of the sphere...

Equation for Area of a Sphere

Similarly for the volume of a sphere, the internal space can be visualized as how many cubic radius units are needed to fill the shape...

Equation for Volume of a Sphere

Because the sphere only requires a single measurement to define its size, the volume or the radius can be used as the starting point to calculate the sphere's radius. The transformations to these equations to solve for the radius given the the volume or the area appear slightly more intimidating but are algebraically straightforward transformations of the formulae above...

Equations for Radius of a Sphere 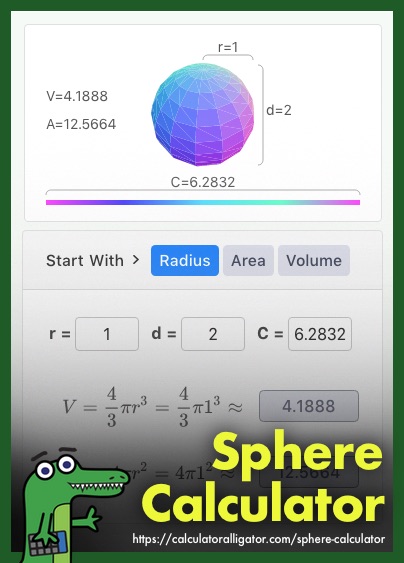